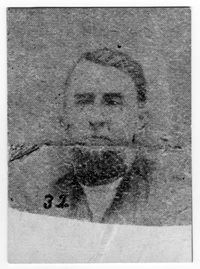 Jonathan Franklin Denton was the oldest son born to John B. and Mary Greenlee Denton. He was born on July 13, 1828 in Clark County, Arkansas. He married Amanda Jackson June 1, 1853 in Hopkins County, Texas. They had no children. Jonathan served for the Confederacy in Co K, 1st Texas Cavalry during the Civil War. He is the only child of John B. Denton that is documented as living in Denton County. He is listed in the 1870 Denton County census as a school teacher living in Pilot Point. Jonathan followed his father into the Methodist ministry and spoke at John B. Denton’s 1901 burial. Jonathan Denton died on August 8, 1907 in Weatherford, Texas. He is buried at the Old Greenwood Cemetery in Weatherford.