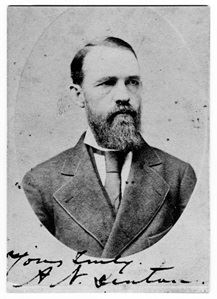 Ashley Newton Denton was the fifth child born to John B. and Mary Greenlee Denton. He was born on March 12, 1836 in Indian Territory. He married Margaret Hester Murchison on June 25, 1861 in Fort Worth, Texas. They had 8 children: Arthur Murdach, Eleanor Terry, Mary Alice Stewart, Francis Burbank, Henrietta Russell, Joseph Murchison, Louis Hunter and Ashley Newton, Jr. Ashley Denton was a physician and a surgeon who practiced in the Austin and San Marcos area. He studied medicine in Fort Worth and served as a surgeon during the Civil War. Ashley was the superintendent of the State Lunatic Asylum in Austin for almost five years. He was also a member of the 13th Texas Legislature. Dr. Ashley Newton Denton died in San Marcos, Texas on March 4, 1901.