Who was John B. Denton?

Denton County and its county seat, the city of Denton, were named for John B. Denton, a pioneer preacher and lawyer who was killed in an Indian battle in 1841. Few verified accounts of John B. Denton exist. Most of the written accounts are highly romanticized. All agree that he was an eloquent speaker and leader who left his mark on Northeast Texas.

John B. Denton was born in Tennessee in July of 1806. When he was about eight years old he and his older brother William were apprenticed to a blacksmith and Methodist minister named Jacob Wells who moved his family to Clark County, Arkansas. For reasons unknown, Denton left the Wells family at age 12 and worked as a deckhand on a river flatboat. He had returned to Clark County by 1824 at the age of 18 when he married Mary Greenlee Stewart, a 16 year-old girl originally from Louisiana. Denton’s wife is credited for teaching him how to read and write. 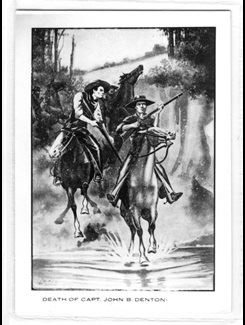 In 1826, John B. Denton entered the Methodist ministry first as a local preacher in Clark County. In 1833, he officially joined the Missouri Conference of the Methodist Church and became a full-time minister preaching in Arkansas and southern Missouri. He traveled for a year, but then returned to being a local preacher. In 1837, Denton resumed life as a circuit preacher and was assigned to the Sulphur Fork Circuit which included Red River and Lamar Counties in Texas. In the fall of 1837, along with fellow minister Littleton Fowler, John B. Denton crossed over the Red River into Texas. His family remained behind in Hempstead County, Arkansas, but in 1838 the Dentons moved to Clarksville, Texas.

Denton gained the reputation for being a skillful orator but he was discouraged with the difficulty of establishing a ministry in the frontier. The pay was low, the work was hard, and he was away from his growing family.

In the spring of 1838, Denton began to study law. He formed a partnership with John B. Craig, a part-time Methodist minister in Clarksville. The older Craig stayed behind while Denton traveled to court sessions. Denton and Craig also speculated in thousands of acres of land in the newly opened northeast territory. Denton’s skill as a preacher carried over into the courtroom. His traveling also allowed him time to preach. He delivered one of the first sermons in Grayson and Fannin Counties while attending court at Old Warren on the county line. He remained an active member of the Masonic Lodge at De Kalb in Bowie County, one of his stops on his ministry and law circuits and helped establish the Constantine Lodge Number 13 at Fort Warren. Denton became increasingly well-known amongst the settlers and ran unsuccessfully for the Texas Senate in 1840.

As the frontier became more settled, the Republic of Texas relied primarily on volunteers to patrol the area. In 1839, Denton answered the call and was commissioned captain of a company in Brig. Gen. Edward H. Tarran’s Fourth Brigade, Texas Militia. It is possible that Denton also served as informal chaplain for his company, preaching wherever they happened to camp. In April 1841 the Ripley family south of Clarksville was attacked and killed by a party of Indians. The volunteer militia was in charge of finding the attacking party.

On May 14, 1841, a group of volunteers led by company commander Capt. James Bourland left Fannin County to find the Indian villages. Capt. Denton, along with Henry Stout served as aides to Gen. Tarrant commanding a detachment of scouts. On May 24, 1841, the group of men located a group of Keechi Indian villages along Village Creek east of present-day Fort Worth. The men took the first two villages with little effort, but were met with gunfire at the third. Denton and Stout took a group of men to scout out the area each taking a separate path. When the two paths converged into one, Stout stopped but Denton charged ahead. Shots were fired and both Denton and Stout were hit. Denton’s wound was mortal. The men retreated taking the injured Stout. A group later returned to recover Denton’s body. Learning that the villages contained over a thousand men, Tarrant called the retreat. The men crossed into what would be Denton County and buried Denton’s body beside a creek.

The sad news of Denton’s death hit Clarksville hard. The young captain left a widow and six children, the youngest barely a year old. Mrs. Denton later married Abner McKenzie. She died in 1849. Two of Denton’s sons followed their father into the Methodist ministry and another son became a respected physician.

The story of John B. Denton does not end there. In 1856, John Chisum, a successful rancher in the Bolivar area of Denton County, remembered the stories his father told him of Denton’s death. Clabe Chisum was a member of the militia party with Denton. When a grave was discovered by some boys along Oliver Creek in Denton County, the younger Chisum investigated. Some survivors of the raid identified the bones by the blanket they were wrapped in, an old broken arm, and some gold teeth. Chisum took the body back to his home and kept it in a box hoping a family member would claim it. When no one did, Chisum buried Denton’s body in the corner of the yard near his house. When he sold his property to J.M. Waide years later, he left written instructions with an old friend, J. W Gober.

In 1900 the Old Settler’s Association of Denton County wanted to bury John B. Denton in the city that bears his name. They placed an advertisement in the paper which Gober answered, producing the letter written by Chisum. The body of John B. Denton was exhumed once again and buried during a large ceremony on the Denton County Courthouse lawn on November 21, 1901.