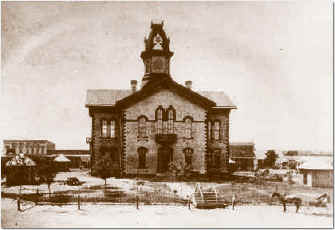 Denton County was established by the Texas legislature on April 11, 1846, shortly after Texas abandoned its dream of being a Republic and joined the United States.

Early pioneers settled along the Trinity River and its tributaries and on the edge of the frontier as it moved westward. The first Anglo settlements were near Hebron in the southeast corner of what would become Denton County, Pilot Point in the northeast and Little Elm on the eastern border with Collin County.

Settlers were scarce, however, until the Republic of Texas approved an impresario grant in 1841 with the Texas Emigration and Land Company based in Louisville, Kentucky. WS. Peters led the group of twenty investors, and the grant became known as the Peters Colony. The contracts eventually covered all of Northeast Texas. The colony’s land office was established near Hebron in the southeast corner of present-day Denton County.

After Texas joined the union, promises of U.S. Army protection from marauding Indians prompted a new wave of immigration.

The new county, carved out of Fannin County, was named for John B. Denton, a pioneer preacher and lawyer who had been killed in an Indian fight in 1841. The pioneers chose a county seat along Pecan Creek and named it Pinckneyville, in honor of Texas’ first governor. Historians differ on whether a courthouse was ever built at Pinckneyville. A 1908 history of the county describes a log courthouse built there, while another history says there were "no improvements" and court was held under a large oak tree.

Pinckneyville lasted only two years. Water shortages forced the fledgling community to move, first in February 1848 to a new site they named Alton a few miles south and again in late 1848 to another site near Hickory Creek. The Hickory Creek location also was named Alton and it remained the seat of Denton County government for about ten years.

By 1856, the little settlement of Alton was thriving. Alton boasted several homes, a blacksmith shop, three stores, a saloon, hotel and bar, two doctors, several lawyers, and a cemetery, and was headquarters for the Denton County Land District.

By 1857, however, Denton County was ready to move the county seat again. County residents wanted a county seat more central to the settlements in Pilot Point in the north and Lewisville in the south. Alton residents voted to move again. This time they called the new county seat Denton. Lots for the original township of Denton were auctioned on January 10, 1857.

The first courthouse in Denton was a two-story frame structure on the north side of the downtown square. The building burned in 1875, destroying most of the county records. A brick courthouse was then built in the center of the square, a two-story building with a tall central tower. Lightning damaged that building and it was condemned and demolished in 1894. Construction of the present Courthouse-on-the-Square began in 1895. The cornerstone was laid in 1896, and the courthouse was dedicated in 1897.

For a decade, Denton County was on the northeast Texas frontier. Cattle and horses ranged on the unfenced prairies. Residents were engaged in ranching and subsistence farming. John S Chisum, who became the most famous cattleman in the West, operated his first ranch in Denton County. He later moved to new ranges on the Concho River in Texas and on west into New Mexico.

The Civil War took many men away from the little settlements, leaving the frontier virtually unprotected. On moonlit nights, Kiowa and Comanche Raiders from Indian Territory crossed into Texas to steal cattle and horses. Fearful settlers called the full moon "Comanche Moon." The last Indian raid in Denton County was in August 1874.

After the Civil War ended, a wave of prosperity triggered more immigration. In 1860, Denton County population was 4,780. In the 1870s, population grew to 18,143. Subsistence farming gave way to cotton farming in the blackland and wheat farming on the prairies. Railroads came through to boost the economy more. From 1890 to 1920, Denton County ranked either first or second in wheat production in Texas.

Denton embarked on a course that would make it a major higher education center when North Texas Normal College, now the University of North Texas, was established in 1890. Legislation authorizing the Girls College of Industrial Arts, now Texas Woman’s University, was passed in 1901.

Denton County covers 953 square miles in north central Texas. The Eastern Cross Timbers juts through the central part of the county. Blackland prairie covers its western half and a slice along its eastern edge. The Elm Fork of the Trinity River flows through the county. The river was dammed in 1920 to form Lake Dallas, which has been expanded and is now known as Lewisville Lake. The U.S. Army Corps of Engineers dammed the river farther upstream in 1986 to form Ray Roberts Lake. A greenbelt along the Elm Fork connects the two lakes. A number of state parks border the lakes.

Vital transportation links contributed more growth. Interstate 35 East was built in the 1950s and joined by Interstate 35 West in the 1970s. Dallas-Fort Worth International Airport opened in January 1974.

By the 1970s, Denton County was the fastest-growing county in the country, with most of the growth along the Interstate 35 East corridor. Denton County has ranked among the top fast-growing counties throughout the 1980s and 1990s. Population has spiraled from 75,633 in 1970 to 143,126 in 1980 to 276,083 in 1990 and 432,976 in 2000. Alliance Airport, which straddles the Denton County-Tarrant County boundary in the southwest corner of the county, opened in December 1989 to trigger growth along Interstate 35 West. Texas Motor Speedway, one of the largest sports and entertainment facilities in the world, opened in 1997 along Interstate 35 West.

By the end of the century, over 400,000 people were living in an increasingly urban Denton County. By the year 2000, the northern area of the county was a center for horse ranches and a balanced farming region producing wheat, cotton, beef and dairy cattle. Much of the industrial and commercial growth, as well as population growth, was centered in southern Denton County.