Lightning is found with every thunderstorm. While the lightning displays may be impressive to watch...they are also deadly! Lightning also causes several hundred million dollars in damage to homes, businesses, churches, barns, and forests each year. 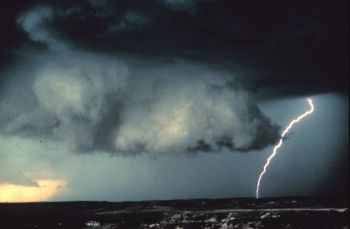 Within the thunderstorm clouds, rising and falling air causes turbulence which results in a build-up of a static charge. The negative charges concentrate on the base of the cloud. Since like charges repel, some of the negative charges on the ground are pushed down away from the surface, leaving a net positive charge on the surface.

Thunder is caused by the extreme heat associated with the lightning flash. In less than a second, the air is heated to 15,000 to 60,000 degrees. When the air is heated to this temperature, it rapidly expands. When lightning strikes very close by, the sound will be a loud bang, crack or snap. The duration of the thunder associated with a nearby lightning strike will be very short. Lightning will rumble for a longer period of time as the sound arrives at different times. This is due to the length of the lightning flash (typically many miles long).

Thunder can typically be heard up to 10 miles away. During heavy rain and wind, this distance will be less, but on quiet nights, when the storm is many miles away, thunder can be heard at longer distances. Bang"

You can estimate the distance to a thunderstorm using the "Flash to Bang." The time from seeing lightning until you hear thunder. Count the seconds between the lightning "flash" and the "bang" of thunder. Every five seconds equals one mile. If you count 15 seconds, the flash was 3 miles away and you know that you are in a high danger zone. Six miles is still in a high danger zone.

Lightning can strike many miles from the parent thunderstorm - so when should you seek a safe shelter? The best answer is also the easiest to remember.

If you can see it or if you can hear it, flee it!

Resuming Activity After a Thunderstorm