Wind shear is the meteorologist’s way of describing a rapid change in either wind speed or wind direction over a short period of time or distance. Wind shear can describe the changes either horizontally (along the Earth’s surface) or vertically.

A "downburst" is a strong downdraft which causes damaging winds on or near the ground.

The term "microburst" describes the size of the downburst. A comparison of a microburst and the larger macroburst shows that both can cause extreme wind.

As the colder air strikes the Earth’s surface, it begins to "roll" much like water as a boat moves through it. As the colder air "rolls" out, it is compressed causing winds to increase dramatically - at times even stronger than tornado winds!

The key difference is in two words: in vs. out

Downbursts are much more frequent than tornadoes - in fact, for every 1 tornado, there are approximately 10 downburst damage reports! 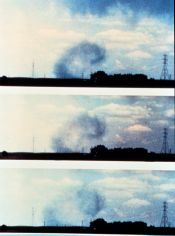 Unfortunately, you can’t look at a thunderstorm and "see" if it’s going to be severe. Doppler radar is able to "look" inside the thunderstorms and "see" the movement of air - giving the meteorologist indications of microbursts and allowing them to issue warnings.

In August 1983, the strongest microburst recorded at an airport was observed at Andrews Air Force Base in Washington DC. The winds speeds may have exceeded 150 miles per hour in this microburst.

The peak gust was recorded at 2:11 pm, 7 minutes after Air Force One, with the President on board, landed on the same runway as the microburst was recorded!

Why Downbursts are Often Mistaken for Tornadoes

The best way to determine if the damage was caused by a tornado or a downburst is to fly over the area and look down on the damage path.