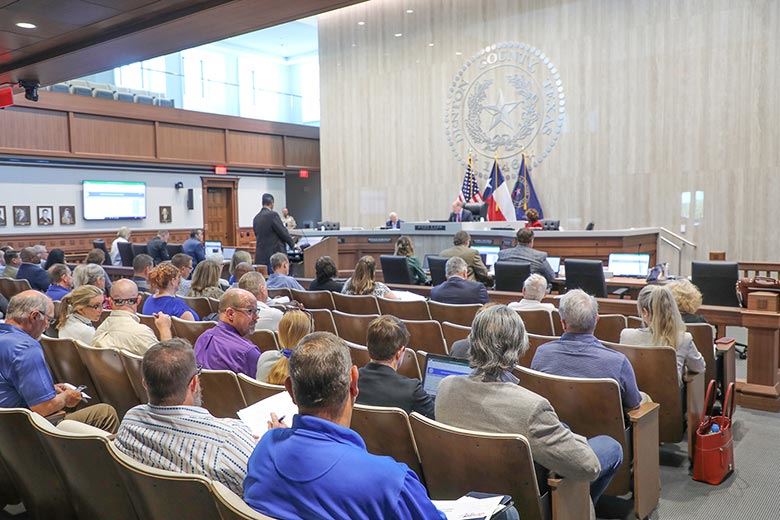 The Denton County Commissioners Court hosted a bond workshop on Tuesday, July 26, 2022, under the “committee of the whole” concept in which all attendees are part of the committee and thereby allowed to participate in discussion about the proposed bond election.

“We want to be super transparent and get as much public feedback as possible,” Denton County Judge Andy Eads said.

More than 75 people attended the Tuesday afternoon workshop at the Denton County Administrative Courthouse, including officials from state and local municipalities including Double Oak, Hickory Creek, Prosper and Shady Shores – to name a few. A second workshop is scheduled for 1 p.m. on Aug. 9, 2022, in the Commissioners Courtroom on the third floor of the Denton County Administrative Courthouse at 1 Courthouse Drive in Denton.

As part of the proposed Denton County Transportation Road Improvement Program 2022 (TRIP 22), Denton County is proposing such major projects as Loop 288 West, Loop 288 east frontage roads, FM 1171 West, I-35W frontage Roads, US 377 north and the Outer Loop from I-35 to the Dallas North Tollway at the Denton County line. The location of the Outer Loop has not yet been defined, officials said. A number of projects, at least 108 to date, are also included in each of the county’s four precincts for a total proposed TRIP 22 bond package of approximately $540,452,800, which represents Denton County’s costs. (SEE Denton County Road Bond 2022 DRAFT PROPOSAL)

In short, Denton County covers the engineering and other start-up costs to ensure projects get to the front of the line to procure funding from the Texas Department of Transportation (TxDOT), officials said. The county also works with municipalities to help fund major thoroughfares.

To date, Denton County Commissioners, working with partners such as TxDOT and local municipalities, have utilized the voter-approved proceeds of $187 million from the 2004 road bond program and $310 million from the 2008 road bond program to fund and construct more than $8.4 billion in roadway projects throughout the county that improve the quality of life of every resident.

“I would put Denton County at the top of efficiency in working on road projects,” Denton County Andy Eads said. “This proposed bond election is focusing on our roads and bridges.”

Judge Eads said Commissioners Court has worked closely with municipalities to draft the list of road projects. And, he said, the average resident may not realize how long it takes to get a road built.

“There is a long lead time on projects when it comes to engineering, right-of-way acquisition and utility relocations. By the time the public sees the first shovel of dirt, we’ve likely been working on the road project for 10 years.”

Denton County Auditor Jeff May said Denton County is just now spending the last of the 2008 bonds. Denton County is fiscally set to issue new road bonds with a strong AAA rating, a healthy balance of $83 million in the fund balance – all of which would likely result in no increase in the tax rate and a potential decrease in coming years as property values continue to increase.

The public is invited to a second workshop at 1 p.m. on Aug. 9, as mentioned above. Feedback on the proposed TRIP 22 projects is welcome. Below is a presentation about the TRIP 22 bond program as well as an excel spreadsheet that outlines the proposed road projects to date that could be included in an upcoming bond election.