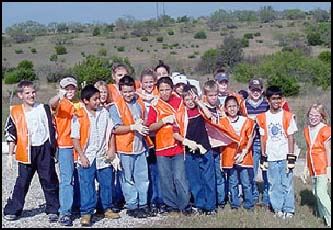 Personal involvement has proven to be the best way to keep our roads clean. The Adopt-A-Highway program costs nothing for individual groups like businesses and civic organizations to get involved, and in return for their efforts gain public recognition. - Billy Black, Co-founder, Adopt-A-Highway

WHAT IS AN ADOPT-A-ROAD PROGRAM?

In 1984, James R. Evans, an employee of the Texas Department of Transportation was alarmed by debris blowing out of the bed of a truck while driving. He was concerned about the increase in the cost of picking up litter and soon began asking local groups to "adopt" a section of highway. Today, the Adopt-a-Highway program involves nearly 90,000 groups in 49 states and 5 countries.

As cities and counties continue to experience wide spread growth we are seeing an increase in litter along our local roads throughout the state. On highways alone, one billion pieces of litter accumulate on these state maintained road systems each year. According to the Texas Adopt-A-Highway facts sheet, it costs approximately $32 million to clean up roadside litter and debris in one year. 90% of this cost is paid for with tax dollars.

Most people are under the impression that prisoners are responsible for picking up litter. However, 90% of Texas roadways are picked up by private contractors and/or city and county road crews. An adopt-a-road program is geared toward saving tax-payer dollars with volunteer labor. This would include schools, businesses and civic organizations seeking to get involved in the community and interested in keeping local roadways clean and safe.

The benefits of such a program are two-fold. First, volunteer labor to pick up litter along segments of county maintained roads saves taxpayer money. Last year, Denton County Precinct 1 spent $15,000 to pick up trash and other debris along the County right-of-way. From 2001 to 2004 we spent a total of $59,156. Such a cost involves time, equipment and road crew availability. On average it can cost upwards of $150 for a few hours of trash pick-up a day.

In addition to saving taxpayer dollars, this kind of program provides a unique opportunity for citizens to become involved within the community and with County government. In 2001, the Texas Department of Transportation conducted a "Litter Attitudes and Behavior Study." Their research revealed that the state’s worst litterers are young adults between the ages of 16 to 24. Getting young adults involved in an adopt-a-road program is a great way to educate this age group about keeping roadways litter-free. Research has also shown that motorists respond to seeing volunteers at work and adopted portions of roads are less littered than those maintained by road crews.